Hybrid App Development: Our Guide For 2022 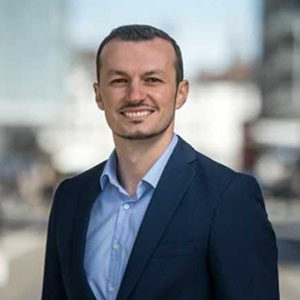 Smartphones accompany your customers every step of the way. Mobile devices have become constant companions in everyday life – and with them the functions offered by applications. Initially, the latter were predominantly native apps, but hybrid applications are now in the fast lane, as they represent an optimal solution for many companies. You can find out what advantages hybrid app development offers and which well-known tech companies opt for it in our blog post!

What Is Hybrid App Development?

The term ‚hybrid app development’ circumscribes a mobile app development that is based on native, as well as web-based elements and technologies. Hybrid apps are being developed on the basis of so-called libraries or frameworks such as Flutter, NativeScript or Ionic. One advantage of these bases is their time- and cost-efficient development. In addition, hybrid apps are scripted by means of web technologies like JavaScript or HTML5. Another advantage: hybrid applications can be developed for several different desktop and mobile operating systems like Android or iOS. Herewith, their development costs can be reduced. They are way lower than the budget required for native programming – the latter requires an individual conception and development for each and every single operating system. This is why Android developers need to be familiar with coding languages like Kotlin or Java, if they want to develop a native application for Android devices.

Developing for iOS on the other hand requires using Swift and Objective C. On a different note, developers of a hybrid app only need to develop a few native elements – for the development of other components one coding language is enough to fit all operating systems. Said native elements are a reasonable addition since they allow access to the device’s hardware. Thus, hybrid applications offer many advantages. In order to make an app accessible to as many users as possible, native app development requires the development of several different apps for all platforms. To enable this process, companies need to hire a highly specialized team that masters both hybrid and native development.

Furthermore, hybrid app development is a very efficient, agile method for software engineering. Only one code needs to be developed, which makes it easier to handle and facilitates further development. This aspect foreshortened the development process of the software, and hereby its time-to-market (TTM). Once it is completed, the application can be launched in the Apple and Google App Store. As a consequence, profits can be generated and feedback can be obtained much faster, and the app can be adapted to the clients’ needs and expectations much sooner. Since it is based on one code only, updates can be developed faster and the application is much more scalable, too. There is room for improvement when it comes to user interfaces and performance – native applications have a flawless aesthetic and a short loading time. If you wish to integrate interactive elements, native app development is the right solution for you. Native apps support graphically demanding software, which is why they are predominantly used when it comes to programming gaming apps.

Nevertheless, hybrid applications are a good choice, which is why so many big online companies favor them.

Create Your Own Hybrid App – With Dinnova

Would you like to shape your company’s digital future successfully? Then Dinnova is the right partner to do so! Just like any other technological solution, hybrid app development comes with some disadvantages, but far more positive aspects. If your highest priorities are a cost-efficient development and scalability, a short development time and high efficiency, then a hybrid application is the solution you were looking for. Furthermore, many of the biggest companies in the world rely on hybrid apps’ performance – whether it be for passenger transport, online business or the App Store itself. When developing an application, we promise to develop a product of high quality, reliability and safety. Take advantage of the numerous benefits that hybrid apps provide by relying on our support and expertise. Our team of experts will be happy to support you regarding designs and functionalities. The same goes for other digital products and services that we provide: be it customized software development, to business model or SaaS consultations, to developing native, hybrid or progressive applications. We are looking forward to hearing from you and to a successful collaboration in the future!

CEO
Not only is Arber Bullakaj an Innovation Expert with an Executive MBA in Innovative Management and Development, he is also certified as a Senior Project Manager (IPMA Level B). These skills, combined with an absolute passion for innovation, represent a big advantage for our clients’ needs and for the future of Dinnova AG. As a full-blooded CEO he prefers to ‘go all in’ into projects and challenges as likes to act as a sparring partner for our team.

This website uses cookies to improve your experience as you navigate through the website. Of these, the cookies that are considered necessary are stored in your browser, as they are essential for the basic functions of the website to work. We also use third party cookies that help us analyze and understand how you use this website. These cookies are stored in your browser only with your consent. You also have the option to reject these cookies. However, rejecting some of these cookies may affect your browsing experience.
Functional
Functional cookies help perform certain functions, such as sharing website content on social media platforms, collecting feedback, and other third-party functions.
Power
Performance cookies are used to understand and analyze key website performance indices, which helps provide a better user experience to visitors.
Analytics
Analytical cookies are used to understand how visitors interact with the website. These cookies help provide information about the number of visitors, bounce rate, traffic source, etc.
Display
Advertising cookies are used to provide visitors with relevant advertising and marketing campaigns. These cookies track visitors on various websites and collect information to deliver tailored advertising.
Other
Other uncategorized cookies are those that are still being analyzed and have not yet been categorized.
Required
Necessary cookies are strictly necessary for the proper functioning of the website. These cookies ensure basic functionalities and security features of the website, anonymously.
SAVE & ACCEPT